Dramamine for Anxiety – Is the anti-nausea medication good for fighting anxiety?

Dramamine, generic name Dimenhydrinate, is an over-the-counter antihistamine drug primarily used to treat motion sickness and nausea. Lately, it has become clear that the motion sickness drug can also provide relaxation benefits. This combination of helping with nausea as well as decreasing anxiety symptoms has proven to be a very useful pairing for many. We look at how dramamine works for anxiety, what the side-effects and dosages are, and a few natural alternatives. 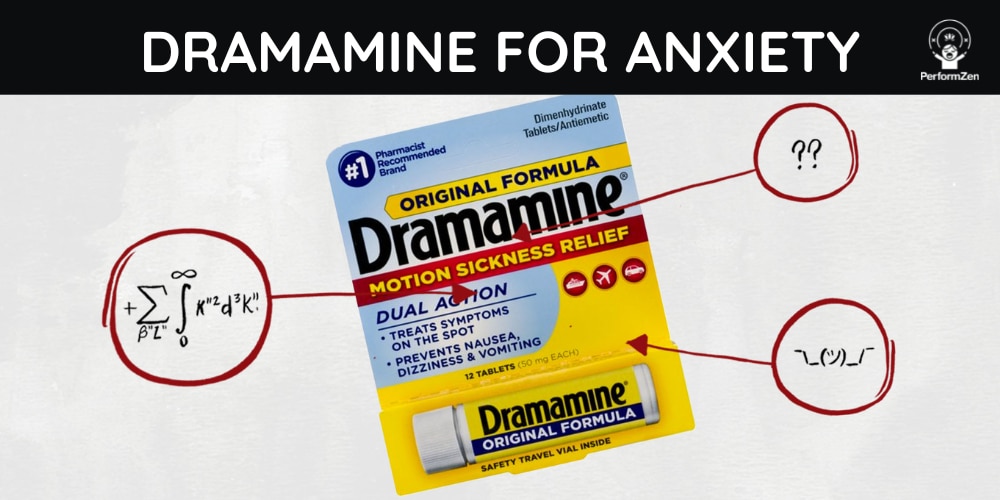 Anxiety, whether it is performance anxiety or social anxiety or any similar anxiety-related issues, has the potential to negatively affect your life, career and relationships. Not kept under control, anxiety can make living a fulfilled, happy life much more difficult than it needs to be.

These types of anxiety are not new. Many accomplished performers and artists still experience stage fright every time they get on the stage or in front of a camera, including popular stars like Adele, Taylor Swift & Shawn Mendes. The list of people suffering in private from bouts of anxiety related to conference calls, meetings, interviews, social gatherings and dates, is extremely long.

Many people choose to self-medicate their anxiety using drugs like Dramamine, generic name Dimenhydrinate and sold under the name Gravol in Canada. Dramamine is an over-the-counter (OTC) antihistamine drug primarily used to treat motion sickness and nausea [1]. More recently, it has become clear that the motion sickness drug provides relaxation benefits, as well. This combination of helping with nausea as well as decreasing anxiety has proven to be a very effective solution to many peoples anxiety issues.

In this article, we’ll look into how Dramamine works to treat the symptoms of anxiety, and its effectiveness at doing so. We’ll also touch on Dramamine dosages for anxiety, known side-effects or interactions that you should know about, and whether there are viable alternatives to Dramamine available for anxiety and how they match up.

Dramamine is available in a tablet, liquid, or chewable tablet form. It is an H1 receptor antagonist, meaning that dramamine is an antihistamine that reduces the effects of natural chemical histamine in the body [3].

How does Dramamine work for anxiety?

Dramamine works by reducing the natural chemical histamine effects of the body, as it is an antihistamine. But unlike many antihistamines, Dramamine is not used for allergies. Instead, it is more often used for nausea. Dramamine blocks the histamine 1 (H1) receptor, which is present in great quantities throughout the brain [5].

Dramamine itself is not a single drug. Instead, it is a combination of two other drugs, which each make up around half of a dramamine/dimenhydrinate dose. Those drugs are [5]:

So 8-chlorotheophylline is essentially acting as a wakefulness agent to counter the side-effects of the main active ingredient: diphenhydramine. In several trial studies (with mice and rats), diphenhydramine has been shown to sometimes have an anxiolytic (anti-anxiety) effect [7].

It appears that most of this anxiolytic effect comes from diphenhydramine’s effect on the central H1 (histamine) receptors. This happens through what is called an inverse agonism. Histamine is blocked, and an opposite effect also occurs (the inverse agonism).

Additionally, if sleep problems are causing anxiety, diphenhydramine’s/dramamine’s positive effect on those problems may reduce anxiety too [7].

Dramamine is generally considered safe when used as directed, but it is not completely without risks. Side effects of Dramamine have been shown to include [2]:

Abuse of dramamine has been reported, and often involves ingestion of high doses to induce psychotropic effects, including hallucinations and euphoria. Psychiatric patients may also abuse dramamine to achieve an extreme anti-anxiety effect.

There appears to be a potential for the development of physical dependence on the drug in individuals who chronically abuse it, although there are only a few cases reported in the literature of physical dependence on the drug. The anti-anxiety effects of taking large doses of dimenhydrinate/dramamine make it an attractive drug of abuse for people who are diagnosed with psychiatric disorders, such as anxiety disorders, trauma- and stressor-related disorders, obsessive-compulsive disorders, and even schizophrenia [4].

Before taking dramamine, make sure that you follow all the instructions given on the product package. Take the medication according to your doctors directions. If you have any concerns, or doubts regarding the usage of this drug, please consult your doctor or pharmacist.

After taking dramamine, the drug is absorbed and reaches its max level in the system in about two-and-a-half hours. Its half-life, or the time it takes for half of the drug to leave your body, ranges from one to four hours.

Dramamine dosage is typically determined by your age, health condition, and response to the treatment by a healthcare professional. Recommended dramamine dosage for nausea and motion sickness for adults and children 12 years and over is 1 to 2 tablets every 4-6 hours. Maximum daily dosage for dramamine is no more than 8 tablets in 24 hours, or as directed by a doctor/healthcare professional. Similar recommended dosages (daily and maximum) are said to work when using dramamine for anxiety, as well.

If you’re not too excited about using dramamine for your anxiety symptoms, perhaps because it didn’t work too effectively for you or because you experienced side-effects, you may be wondering if there are natural alternatives to dramamine for anxiety?

A natural alternative would achieve the same (or, hopefully, better) end-result, which is to provide relief from symptoms of anxiety. A really good alternative to dramamine would provide anxiety relief by supporting your mind and body in a way that, over time, makes you more resilient. You should become better equipped to handle any stress responses that come your way and learn to think about anxious situations in a way that makes them less stressful, in the first place.

The most effective natural anxiety (particularly stage fright/performance anxiety) remedy is PerformZen. PerformZen has proven extremely effective at treating performance anxiety as it contains a combination of GABA & L-theanine, which help boost mental clarity; Theacrine, which aids mental clarity and energy; Ginkgo Biloba, which is an effective stress reducer; plus vitamins and minerals like Magnesium & Vitamin B6, which have proven effective in reducing even severe cases of stress.

This combination provides the positive anti-anxiety effects of drugs like dramamine, but also boosts alertness and mental clarity, which are more subtle symptoms of performance anxiety that dramamine does not address. Overall, this may mean a natural solution such as PerformZen is not only safer, but more effective than dramamine for performance anxiety!

Is Dramamine the best solution for Anxiety symptoms?

Dramamine may be a decent emergency fix for acute anxiety, but in our opinion it is better served as a solution for nausea, motion sickness and even flight anxiety symptoms. With extended use, dramamine can have some worrying and scary side-effects, causing you more problems than you started with. No quick fix is worth the possibility of creating more issues.

Anxiety is overwhelming, and finding a way to feel better may seem impossible. The best thing you can do for yourself is to speak to a medical professional who knows your case and history and seek proper advice for your exact situation. We do have some excellent content about natural (and scientific) solutions to anxiety on the blog and some alternatives like Silexan, and if you are looking for a quick solution to your performance anxiety issues, take a look at PerformZen. 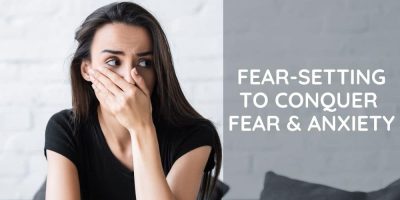 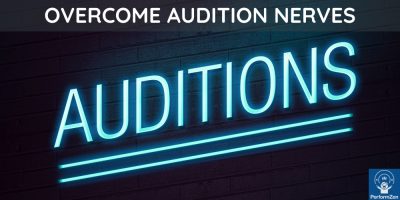 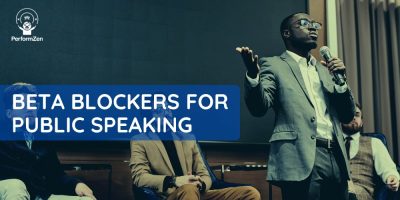 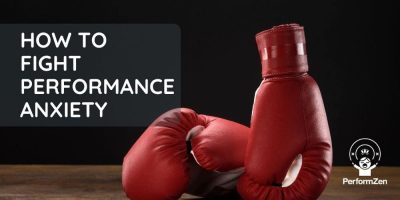 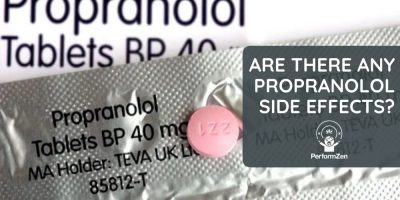